A year ago a new crochet Facebook group was created called CAL – Crochet A Long, a fabulous group of crocheters who share their progress on various CALs around the world.   The success of this group can be shown in the membership, in just a year it has grown to well over 20,000 members, which is all due to the hard work and dedication of the administrators.

To celebrate the one year anniversary, the administrators hit on the brilliant idea to host an anniversary CAL and to invite designers from around the world to design a 12” (30cm) square or two, they even volunteered themselves to design a square (quite a new prospect for many, and I’m so very impressed by them).  The plan is to publish the squares over a few months as a mystery CAL, at the end of which everyone who joins in will have a beautiful afghan blanket.

I feel privileged to be chosen as the designer to publish the first block design for this event, the “Friends Around the World” 1 year Anniversary CAL.

It was such an honour to be asked, especially when you see the list of the great and the good of the crochet world (from around the globe!) who are participating, but to be asked also to be ‘first off the blocks’ (ooops, no pun intended!) is beyond any expectations I had.

For those of my readers who have not yet found the CAL group on Facebook, you can read a bit about it and join here.

And to those who are in the CAL group, welcome to my humble little blog. I do hope you like the design I am publishing today.

Before I show you the square, I must give huge thanks to the team of administrators, organisers and testers – so much hard work has been going on in the background to make this all possible. They have even translated the patterns into another 10 languages, so it is truly global and reaches as many crocheters as possible.

The brief – I was asked to design a 12” block using aran weight yarn, a 5mm or 5.5mm hook and one which a beginner should be able to tackle, in one or more colours. Now this brief  is ideal for me; I love one colour block designs and used them in a couple of CALs before and I like to reach newbies and experienced alike, so aim for patterns that are easy to follow.

I expect you are getting a little impatient now, so here it is: 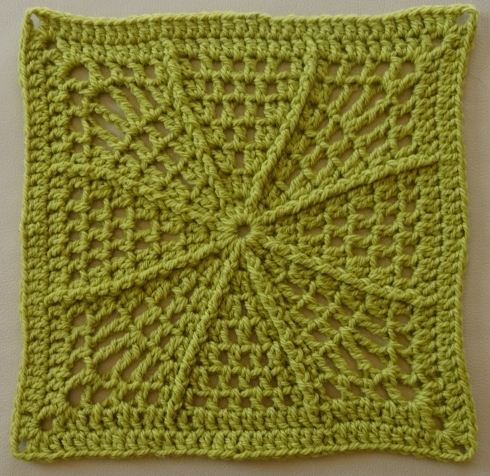 It has texture and lace, and is best made in just one colour.  I used under 100m of Drops Nepal yarn in colour Light Olive (8038).

I’ve called it Octoghan, as it has 8 raised ‘legs’. These raised legs are made using front post stitches, which may be appear a little tricky for a beginner but they aren’t that difficult, it’s just a case of placing your hook around the post of the stitch in the previous round, rather than into the top of the stitch. You have to be careful with your tension though, so I’ve given a sizing after 3 rounds to help you adjust the hook size if necessary.

The pattern, which also includes a chart, can be found on Ravelry here. There are 12 versions to choose from: English terms, US terms and the 10 translations:  French, Spanish, German, Swedish, Dutch, Danish, Finnish, Polish, Italian and Hebrew.

I can’t wait to see lots of Octoghans being shared on Facebook!

A new design will be published each week, so keep your eyes on the facebook page to see when the next one is out.

14 thoughts on ““Friends Around the World” CAL”

This site uses Akismet to reduce spam. Learn how your comment data is processed.

The Pursuit Of Joy

Simply Made Kitchen and Crafts

Finally, you're here! Let's make something!

A little place for all My things Crochet

... relaxing with hooks and yarn ... and other crafting adventures.

crafting,dachshunds including other bits & bobs

A Bunch of Everything

A Slow Life in a Fast World

knitting and other things

Sleep All Day. Knit All Night.

Celebrating Crochet with a Positive Spin

Adventures in knitting, crochet and creativity