Two years ago I spent some time designing and testing my perfect shower mitt, which I made of linen.  My ultimate design became the Linen Mitt.

I use these mitts in the shower daily but I also love lots of suds and last year I decided to take a natural sponge and encase it in a linen bag with a hanging loop.  This morning I needed a new one, so as it was a Crochet Club morning I took a sponge and some linen yarn with me to make a new shower sponge.  This is simple and quick to make and was admired, so I decided to share the pattern on here, along with a few photos from this morning! 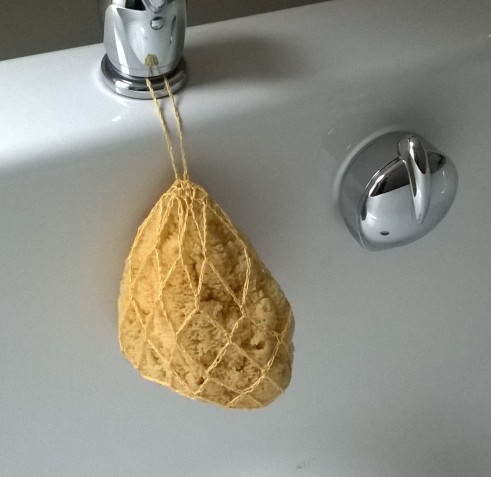 I used a natural sponge about 15cm high and 12cm across, this is probably the largest size I like to use (my last one was slightly smaller).  The linen was linen thread by Namolio.  And I used a 3mm crochet hook.

Start with 4ch and join into a ring with a ss

At this point I want to start making bigger loops, so rather than work in tr with ch-sps, I use long ch loops and use dc

Check it against your sponge as you go 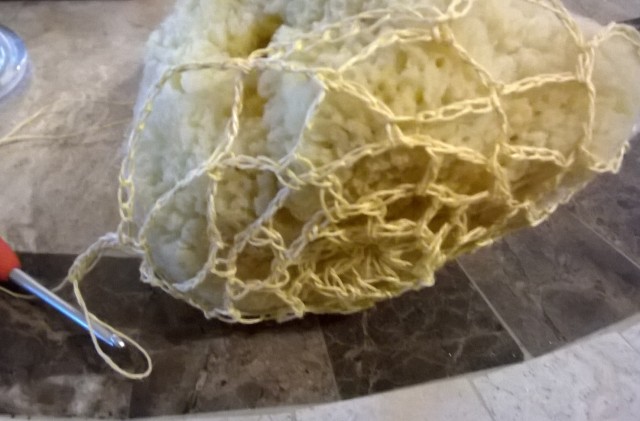 I then did 4 more rounds of loops, using 12ch in the loops and checked against the sponge, I found at this point that the linen stretched all around the sponge and I was ready to seal it in.

Now keep your sponge inside the linen ‘bag’ to start sealing it in.

You may wish to repeat the last round, missing out some 1ch-sps to tighten it a bit more

Finally, make about 40ch and ss back to the start of your ch, break yarn, fasten off and sew in all ends.

Voila!  Your new eco shower sponge is ready for use.   These also make perfect gifts with a bar of natural soap.

This pattern and photos are copyright.

This site uses Akismet to reduce spam. Learn how your comment data is processed.

The Pursuit Of Joy

Simply Made Kitchen and Crafts

Finally, you're here! Let's make something!

A little place for all My things Crochet

... relaxing with hooks and yarn ... and other crafting adventures.

crafting,dachshunds including other bits & bobs

A Bunch of Everything

A Slow Life in a Fast World

knitting and other things

Sleep All Day. Knit All Night.

Celebrating Crochet with a Positive Spin

Adventures in knitting, crochet and creativity